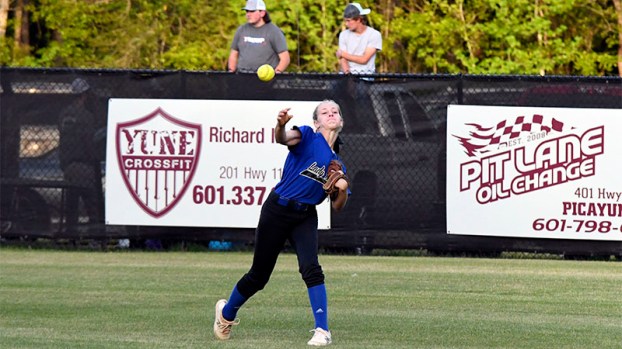 Warming Up: A PRC outfielder goes through her throwing motion while preparing for an inning to start. Photo by Jonathan Mitchell.

PRC softball learns some lessons in losses to Sumrall

Pearl River Central’s softball team dropped both games of a doubleheader 11-7 and 11-9 against Sumrall Friday night.

The non-district losses don’t affect the team’s ability to claim the district championship, but they do serve as an opportunity for the Lady Blue Devils to identify potential weaknesses that need attention.

“I’m not big on the moral victory thing, but I think they just needed it. It was one of those situations where it (showed) me a couple things that maybe we need to work on going into this last stretch against Long Beach and Picayune. It was a mixed bag on how things went in those games. I’m just hoping it all comes together in the two games later this week,” Head Coach Tony Labella said.

Carsyn Cacioppo led the offensive onslaught for the Lady Blue Devils in the first game going 3-4 with a double and an RBI, while Madison Smith and Jazmin Roberston split the pitching duties and combined to strike out three Sumrall batters.

Ashlyn Dean crushed a grand slam in the second game on a night where she went 1-4 with four RBIs as Robertson again took the mound and went six innings while giving up eight earned runs and striking out one.

Even though neither game ended with a PRC win, Labella said the opportunity to put his players up against some talented competition might benefit the athletes moving into this week’s district games.

“With the quality of the at-bats most of the girls in the lineup had 13 or so at-bats in two days. We realized scheduling those games that there was a chance we may not win them, but the coaches made the decision that we needed to see live pitching,” Labella said.

During Labella’s tenure as head coach PRC has gone 33-4 in district play, dominance that has carried over to this year.

The Lady Blue Devils have district games against Long Beach (April 13) and Picayune (April 16) that will determine if the team once again is named district champions after not having a chance to defend that title last year due to COVID-19.

The pressure is on and now the young team must balance nerves and expectations heading into the two matchups.

“I think the focus is there. They know what’s at stake. I think they remind themselves of how tough it was for last year’s team to not have a chance to defend the title streak. It’s not like the world is going to end if we don’t win district again, but it’s a hard streak. I don’t want them to think all the pressure of the world is on them, but I also want them to appreciate that they don’t get any do overs at this point,” Labella said.