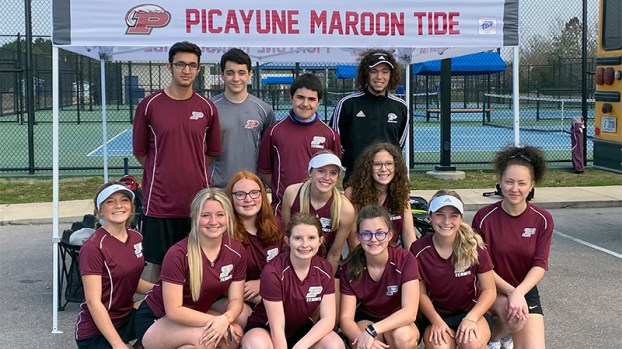 So Close: Picayune's tennis team won district this season and nearly moved on to the second round of the playoffs before losing to Wayne County Monday. Submitted Photo.

Picayune’s Maroon Tide tennis team took on Wayne County Monday evening in a set of playoff matches and couldn’t quite pull out the victory.

Seeing as several of the players had never picked up a racket before the season began, there were still some nerves as the athletes took the court.

“There were those that did let the emotions get to them too much, but most of them rose to the challenge and played well. It just wasn’t meant to be,” Head Coach Chris Wise said.

The season was all about getting the new players comfortable on the court while having the experienced athletes lead by example.

Considering the overall inexperience of the squad, and the number of athletes returning next year, Wise said he was happy with his team’s progress this season.

“Without doing actual numbers, at the beginning of the season or going back to the summer and the skills camp we had, about 75 percent of kids have never played before. To come as close as we have with that little tennis (is a good sign). We’ve done tremendously well to win district and get as close as we did to almost getting in the second round,” Wise said. The season isn’t quite over for some of the athletes however.

Six maroon Tide players will compete at the state tournament later this month.

Players who aren’t going to state are still welcome to participate in the upcoming practices, but the workouts will become a little more detail oriented and nuanced as Picayune’s players prepare to go up against the best in the state. “We’re going to be focused on continuing to improve our skills and not becoming dormant. We’re trying to look at what weaknesses we have and trying to improve that and we’ll just get a little bit better gradually every day,” Wise said.

Picayune baseball looking to bounce back

Picayune was defeated in an important district game against Hattiesburg Tuesday evening 9-5 after losing two games to the Pearl... read more