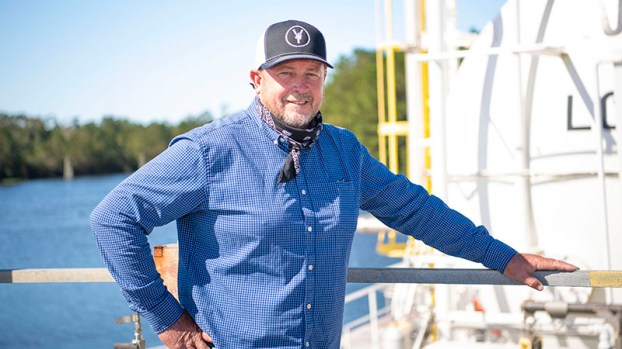 Billy Davis has worked at Stennis Space Center since 1989. He now serves as operations manager/ supervisor/engineer for the Cryogenic Storage Facility and High Pressure Gas Facility.

Billy Davis grew up as a “space age” child. His earliest space-related memory is sitting in front of a black-and-white television to watch astronauts walk on the Moon.

In addition, as a native of Pearlington, Mississippi, the young Davis could hear the rocket engine and stage tests conducted at nearby Stennis Space Center. He saw the footage of Saturn V stage tests at the NASA site.

After completing school, Davis asked an acquaintance who worked at Stennis if there were any openings on site. The friend told Davis about an entry-level position with site contractors. Davis applied and began work with Sverdrup as an electro/mechanical technician in the Calibration Lab in 1989. Two years later, he moved to the test operations side of Stennis as a mechanical technician.

“Essentially, we provide all the sasses and propellants (fuel) needed to test fire rocket engines and stages on site,” explained Davis, now a resident of Carriere, Mississippi.

When it comes to testing the core stage of NASA’s new Space Launch System (SLS) rocket on the B-2 Test Stand at Stennis, that responsibility looms large. The High Pressure Gas Facility has been modified to provide the large volumes of gases – nitrogen, hydrogen, helium and high-pressure air – needed for testing. The Cryogenic Storage Facility will provide the 733,000 gallons of liquid hydrogen and liquid oxygen needed during the wet dress rehearsal and hot fire test of the SLS core stage.

“Our main focus at this point is to make sure the team and all the equipment is in place and ready to go for wet dress and hot fire tests,” Davis said.

It is an exciting – even historic – time for Davis and others as the SLS core stage systems are activated and tested for the first time before an actual launch.

“When I first started out here, Saturn V testing for the Apollo Program had ended and space shuttle main engines were already being tested,” Davis said. “This SLS testing represents a ‘first,’ so everyone here now will have their own place in the history books, just like those teams that tested the first Saturn stages and all of those space shuttle engines.”

Just as the Saturn V stages were used to fly historic missions to the Moon, the SLS is being built to make new history. It will return humans, including the first woman, to new regions of the Moon through the Artemis program and, eventually, power missions to Mars.

“It is exciting to see all of the men and women I work with go above and beyond to everything they can to support this core stage testing,” he said. “It’s like family working together.”

That family is now growing as younger engineers and technicians arrive on site. In addition to supporting ongoing work, Davis also is focused on helping the new employees transition into their roles so they will be ready to support future testing activity on site.

“The future here at Stennis looks bright we get back into regular testing like we did in the space shuttle days and prepare to test the next generation of engines that may roll out,” he said.

Looking back, Davis counts his own tenure at Stennis as a blessing, which he credits both to his colleagues and his family.

“I have had the opportunity to work with some of the best engineers and technicians here,” he said. “I learned something from each and every one of them. But I will have to say my wife and kids have been my rock. They have supported me and my job and always understood when the job called.”

Two people have been arrested in separate cases that both involved their vehicles striking juveniles walking on the side of... read more