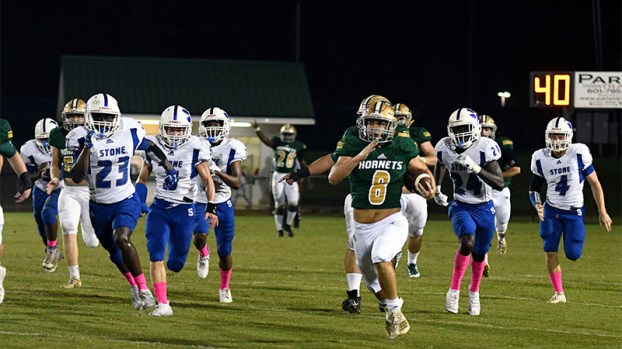 Speed Kills: Running back Tyron Holston finds himself in the open field heading for the end zone as defenders try to chase him down. Photo by Jonathan Mitchell.

Poplarville took control of the game early, leading Head Coach Jay Beech to say he was pleased with his team’s performance.

“I thought we executed well on both sides of the ball. Stone is a very good team and they’re going to be fighting for (first or second place) in the district,” Beech said.

DJ Richardbey led the Hornets with 221 yards rushing and five touchdowns against Stone County, but he’s not the only weapon Poplarville has in the backfield.

Greg Swann and Tyron Holston have also been integral parts of the Hornets’ offense this season.

The three-headed monster of Swann, Holston and Richardbey gives opposing defenses fits, and Beech said it’s good to have those options heading into this week’s matchup against the Purvis Tornadoes.

“It’s big for us knowing defenses can’t just focus on stopping one person. (The backs) have to be unselfish and block for each other when they don’t get the ball, but when they do get it they have to trust their teammates to block for them,” Beech said. Purvis is 4-2 this season, but has lost two in a row against Stone County and then Sumrall last week.

The Tornados have a dangerous running back in senior Kade Sherrill the Hornets will have to neutralize.

Luckily for Poplarville, the linebacker corps has performed well this year led by senior Mason Anderson, and may be up to the task. “He’s had a great year for us. We’ve asked him to do a couple different things. He’s played some defensive end in some packages, and middle linebacker in other packages. He’s also coming down on special teams and making big hits, big tackles. He’s had a great senior year,” Beech said.

The defense has been a work in progress this year as the athletes adjusted to new defensive coordinator Jacob Aycock’s system, but as the weeks have passed the players have gotten more comfortable and it’s showed in their performances.

The level of play is nearly where it needs to be, but there’s still some room for improvement.

“We started off playing pretty slow and each week we’ve gotten to play faster and faster, and that’s because we’re more used to the system. We’re on a three game win streak, but we need to realize that we’re not where we need to be. Even on a win streak there are still ways to get better. We’re going to pinpoint those things and try to get better at them,” Beech said.

A victory over Purvis this Friday will put the Hornets at 3-0 in district play with only two district games left.

However, to beat a team like the Tornadoes the Hornets will have to bring their A-game.

“I just want to see us execute on a high level and eliminate some of the negative plays we’ve had. We need to play well on special teams and just try to get a little better this week,” Beech said. The game against Purvis will be at home for the Hornets and will start at 7 p.m.