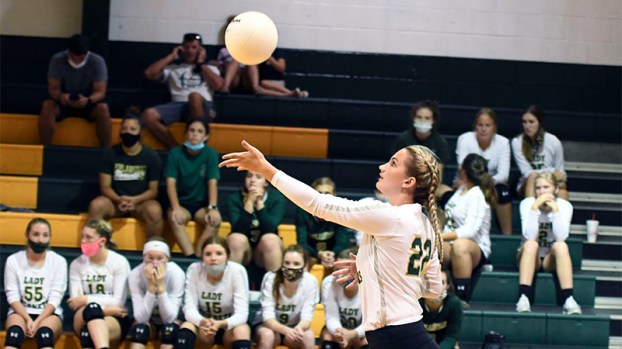 Hitting For An Ace: Senior Cassidy Cartwright goes through her serving motion during a recent Lady Hornet game. Photo by Jonathan Mitchell.

The victory over the Aggies came just a few days after an important away game win against the Stone County Lady Tomcats.

Both teams were district opponents, so the wins put Poplarville in a good spot heading into its final week of regular season games.

The Lady Hornets haven’t quite secured a playoff position yet, but with the race for the two playoff spots down to just three teams, Purvis, Stone and Poplarville, the Lady Hornets’ chances are looking good.

Poplarville’s final two games, against Stone County and Purvis, will be at home.

A lot will be on the line when Poplarville takes the court next Tuesday against Stone County, and Head Coach Robin Jeffries said there’s only so much she can do to prepare her team mentally for the high-pressure game.

“It’s really up to them. We had a little chat after practice where we talked about where we are and that it’s important to start thinking about that now and not wait until (the game). Like I tell them all the time, I can’t win it for them. It has to be them coming together and sticking together,” Jeffries said.

Consistency and competitiveness have been points of emphasis this year for the Lady Hornets.

Jeffries wants her players to play with the same drive and intensity no matter who they’re facing, but so far this season it’s been an up and down process.

The team is making progress, but the players can’t afford to take their foot off the gas depending on the game and opponent.

“We couldn’t have played any better (against Stone County). Serves, sets, hits and digs we were just there. I would’ve said then that now (the message has) hit at the right time, but when we went to Forrest County we didn’t do those things as well. It’s a game-to-game thing,” Jeffries said.

The want and desire to win a game has never left the team, it’s just a matter of controlling those emotions and using them in a positive manner.

Poplarville’s playoff spot will be at stake when the Lady Hornets play next week, so Jeffries wants to see some passion on the court for the team’s final two games.

“(The most important thing is) probably the eagerness to do it. Going in with some emotion, some excitement, some enthusiasm and not just talking about it. Show it in your body language, create some excitement,” Jeffries said.