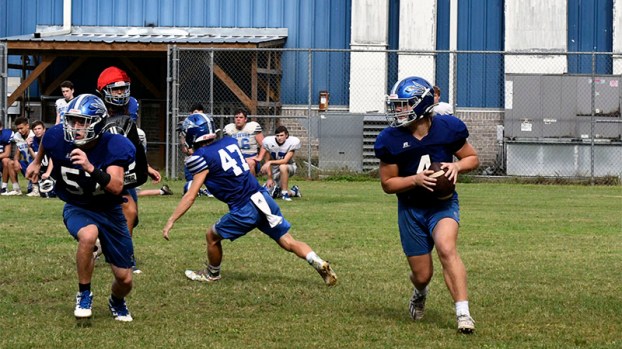 Roll Out: Quarterback Dalton Lee strafes to his left with a lead blocker in front as he searches for a receiver downfield. Photo by Jonathan Mitchell.

PRC preparing for first home game of the season

The Pearl River Central Blue Devils won their first game of the season against Sumrall and will now shift their focus to the St. Martin Yellow Jackets.

The game against St. Martin will be the first home matchup for PRC after going on the road for the first game of the season.

A part of the Blue Devils’ game plan against Sumrall was a two-quarterback system that’ll likely carry over to the game Friday evening.

Dalton Lee and Cameron Brunson both saw time under center, and Head Coach Jacob Owen said both quarterbacks bring something to the table.

“We’re asking Cam (Brunson) to do a lot more this year and he’s playing a lot of defense for us. Dalton (Lee) is guy we trust to put under center if we need to. We feel like both of them do different things well and we’re not afraid use either of them,” Owen said.

The Yellow Jackets lost their first game of the season in a close battle with St. Stanislaus 21-16, but that doesn’t mean Friday’s game will be an easy win for PRC.

Owen said his younger players have to learn how to handle the intensity of a football game, no matter the opponent.

“We have some young guys that don’t understand the amount of effort it takes to win a high school football game. The team we played (last) Friday night was well coached and played extremely hard. That’s tough to beat any Friday night regardless of talent level,” Owen said.

In preparation for the Yellow Jackets the Blue Devils will look to clean up some of the mistakes made last week.

Owen wants to see an increase in intensity from his players as they get ready for their first home game of the season.

“We’re just going to focus on our execution and focus on us like we do every week. We would like to play a much more physical game (this week). I feel like if we’re more physical this Friday night we’ll be 2-0,” Owen said.

Finally getting to play in front of a home crowd is a welcome opportunity for the Blue Devils considering there wasn’t a guarantee the football season would take place because of COVID-19.

However, now that the action is starting the players and coaches are ready to put on a show for the fans.

“We know it’s not going to be exactly the same, but our band will be there and dance team will be there. It’s like the gang will be back together again,” Owen said.

Poplarville football looks to bounce back after loss

The Poplarville Hornets are setting their sights on this week’s matchup against the D’Iberville Warriors after a close loss last... read more