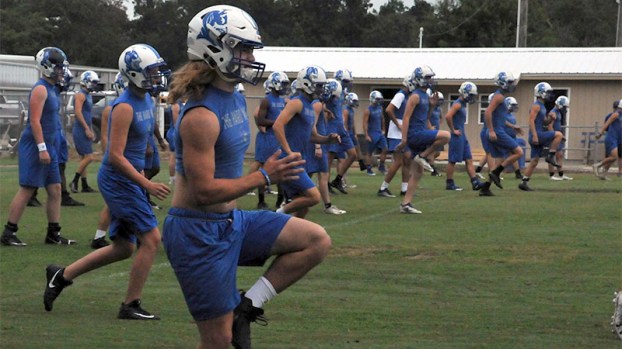 Yearly Tradition: Clay Spiers leads other athletes during a warm up exercise as part of the 'Baddest Devil' week. As a senior, Spiers was named one of the captains last year. Photo by Jonathan Mitchell.

The yearly tradition of the Pearl River Central football athletes competing against one another in the ‘Baddest Devil’ competition is taking place this week.

Players are put through a gauntlet of tests including maxing out on three lifts (bench, squat and power clean), being timed on their 40-yard and 20-yard dash speed, participating in a dot drill, box jumps and standing broad jumps, then finishing it off with a mile long run.

The competition will end Thursday with points the athletes accumulated throughout the week being tallied up.

The athlete with the most points will be named the ‘Baddest Devil’, but will share the spotlight with nine other teammates to fill out the top 10.

Those players’ names will live on forever as part of a sign placed on the program’s weight room wall.

Head Coach Jacob Owen said the week serves as a good measuring stick for his team as he evaluates the progress athletes have made.

“You get a good idea of what kind of team you’re going to have as far as how strong you are and how fast you are,” Owen said.

The tests are meant to challenge the athletes, while also exposing their strengths and weaknesses.

Players can always improve, and Owen said the ‘Baddest Devil’ gauntlet helps the athletes push themselves.

“It’s really about competing with yourself and challenging yourself to do something you’ve never done before. (It’s) also a competition with your teammates,” Owen said.

Whoever is crowned the ‘Baddest Devil’ will automatically be made a captain.
Following that, the team will vote on the other players deserving of filling out the other three captain roles.

The process is one steeped in tradition, and Owen said the week as a whole has allowed athletes to return to some sense of normalcy, even with COVID-19 guidelines in place.

“Absolutely I think it helps a lot. This is usually what we do prior to getting ready to have picture day and getting ready to start school. It’s just a natural progression. Getting back to a sense of normalcy is good for kids,” Owen said.

Following the end of the captain naming process there will be food and drinks available to the athletes provided by parents as a way to celebrate the players’ progression.

The entire process is a way to get the athletes prepared for the return to school, and full contact practice.

If the current schedule from the Mississippi High School Activities Association holds, then the pads will come out on August 19 as the Blue Devils prepare for their season.

The Mississippi High School Activities Association has approved a new series of COVID-19 related guidelines for fall sports. One of... read more