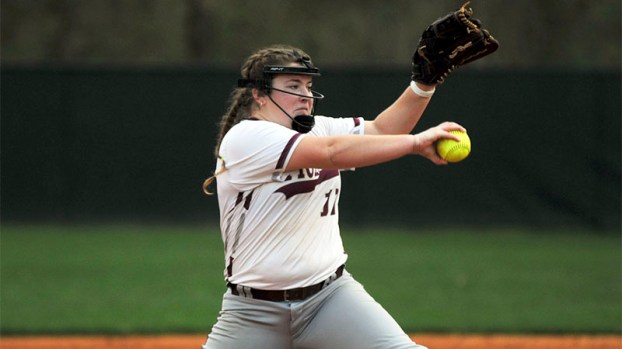 Graduation: Morgan Dickerson goes to throw a pitch during a Lady Maroon Tide practice last season. Dickerson graduated last year and will have to be replaced on the mound. Photo by Jonathan Mitchell.

The Picayune softball program had its final summer practice Monday evening after an eventful month of workouts.

Courtney Dickens was named the new head coach of the program in June, so practices didn’t start until July 6.

Because the team lost a portion of last season due to COVID-19, the emphasis this summer was getting each player back in the flow of things. Players were split into positional groups before going through specific drills to increase their defensive skills.

Dickens said a priority was also placed on hitting, with batters facing off against a full defense so that more players would get meaningful reps during batting practice.

“I feel like our offense has struggled the last couple of years, so I wanted to make sure I gave them repetitions this summer,” Dickens said.

Dickens has been a part of the Picayune softball program for years as a coach and player, so there wasn’t a lot that changed for the players with Dickens at the helm.

“Me being there with Coach Kristi (Mitchell) for so long, it just made it a really smooth transition. They know what I expect,” Dickens said.

Dickens said the loss of last season served as a wake up call for the athletes who may have not truly appreciated the opportunity to play softball. Now players understand their seasons could be taken away from them at any moment, which led to some extra excitement from the players as the practices went on. “I feel like the kids have come out and been really excited this summer, especially since their season got cut short. I’ve had great numbers every practice and I think they’ve been working hard,” Dickens said.

The fall period will serve as a time of weight lifting and conditioning for the athletes.

Dickens is also the head coach of Picayune’s volleyball program. The volleyball team is set to start practices Aug. 10 with games starting Aug. 24. Because there won’t be a class period for softball specifically in the fall, Dickens said she’s thinking of bringing in softball players when the volleyball team hits the weights after school as a way to keep the athletes engaged. “We have to work with what we can, then starting in January after Christmas break we’ll be able to get back on the field and doing things. This fall is probably going to be more conditioning and weight lifting,” Dickens said.

It’s been a whirlwind couple of weeks for the sports programs at Pearl River Community College as the National Junior... read more