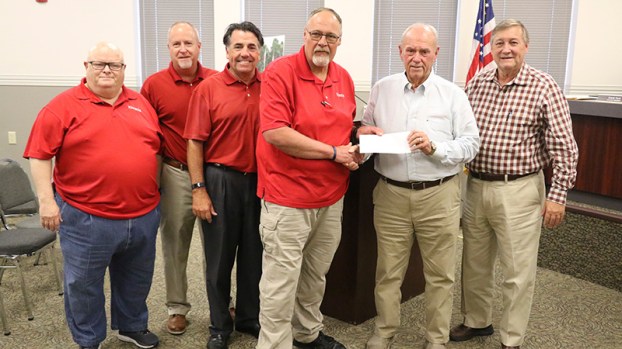 Members of the Kiwanis Club of Picayune donated more than $11,000 to the city of PIcayune during Tuesday’s City Council meeting. The donation will be used to install an ADA complaint merry go round at Friendship Park. Photo by Jeremy Pittari

Rains and projects discussed by Council

Heavy rains have caused the city of Picayune’s employees to struggle to keep up with mowing, and issuance of construction permits within the city are apparently on the rise.

Those were just some of the updates provided during Tuesday’s City Council meeting during a new agenda item called City Manager Updates.

City Manager Freddy Dreannan said he added that section, and the subsequent department head updates, to the agenda so the public can stay abreast to what is going on in each department.

Public Works Director Eric Morris said the constant rains have made it hard for city employees to keep up with mowing, but they have managed to do it.

Additionally, work to repair drainage on Clover Circle has begun, and the water project in the north end of the city is underway now that the south end is complete. Crews are also working on a drainage project in the Ponderosa Subdivision.

Code Enforcement Officer Tom Milar said that construction in the city is “wide open,” because he is constantly giving out permits. Additionally, Milar said he is working with Pearl River County Economic Development Director Lindsay Ward to attract multi million dollar companies to the area. He said he couldn’t provide more details since nothing is set in stone.

In the fire department, new firefighters are earning their hazmat certifications and will start hose testing next week. The department is at full staff now with 33 full time firefighters, not counting the administration, said Deputy Chief Ronnie Reynolds.

Within the police department, the rains have kept the number of arrests at a minimum, said Assistant Chief James Bolton. While the department is a couple of police officers short, there are currently 30 sworn officers and 10 part time officers on the force. In addition, investigators are working a recent bank robbery and some narcotics arrests were made.

Councilor Larry Breland asked Bolton how the department handles situations when people come to the police station after hours for assistance. Bolton said that since dispatch was moved to a central facility in Chimney Square and all inmates are now being held at the county jail in Millard, there is no one to man the station when it gets dark. Officers are still on the street during those hours.

If someone goes to the station and needs assistance after hours, there is a phone on the outside of the building that connects them with dispatch. Communications officers will then have an officer meet them at the station. Cameras are installed outside the station as well.

When a suspect is arrested in the city limits, they are transported straight to Millard, Bolton said.

At the end of the meeting, Councilor Anna Turnage asked for an update at the next Council meeting concerning when residents in the Ridge Crest Subdivision can expect to receive city utility services. She said that area was annexed into the city several years ago and those residents still don’t have access to city water, sewer and natural gas services.

Drennan took a moment to remind the public that the Picayune Police Department and Capt. Rhonda Poche Johnson will be featured on the Oxygen network’s show called Cold Justice this Saturday at 7 p.m. The show paid for faster more modern DNA testing that helped lead to the arrest of 47-year-old Sergio Williams of 111 Iris St., according to previous coverage. As a result of that testing, Williams was arrested this year for the murder of his 91-year-old grandmother, which occurred in 1998.

Every motorist in Picayune has noticed the upgrade to the appearance of the interchanges of exits 4 and 6 along... read more