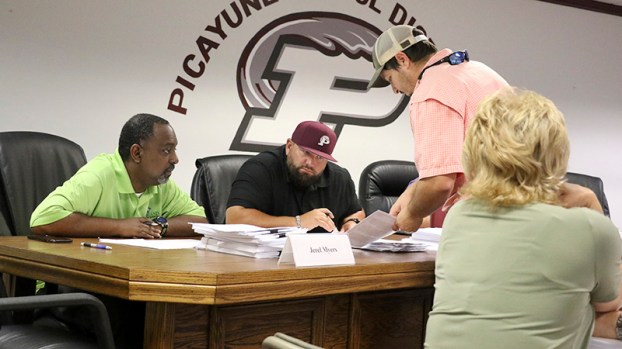 From left, Picayune School Board of Trustees Jerel Meyers and Josh Robertson look over documentation presented to them by Jonathan Hickman of Dungan Engineering concerning the need to relocate a fence in order to replace a bridge near Nicholson Elementary. Photo by Jeremy Pittari

Anticipated funding and expenses within the Pearl River County School District was covered during a budget hearing held on July 8.

The district’s Business Manager T.J. Burleson began his presentation to the Board of Trustees by saying that last year student enrollment ended with 3,223 students attending the various campuses.

He also advised the Board to expect a $150,000 additional expense to help furnish the auditorium when it is complete. Burleson said he hopes that project will be complete sometime this school year. Some of those furnishings will include special seating in the auditorium. Of the 1,000 anticipated seats, 300 will include fold out desks that can be used by instructors to hold testing or other educational curriculum at the facility when it is compete.

Other additions will include purifiers and other upgrades to each campus’s HVAC system, and additional camera systems on all buses.

Burelson said that currently each bus has two to three cameras. That number will be increased to seven per bus, giving drivers and the district’s administration more views of the inside and outside of the bus.

Due to the additional federal funding due to the pandemic, Burleson said he was able to free up $2.5 million that he would like to use to help cover the cost of HVAC replacement and improvement over the next three years or so.

Picayune Police officer fired after being arrested by FBI

Picayune’s outgoing police chief and recently appointed City Manager Freddy Drennan says that he made the decision to fire a... read more