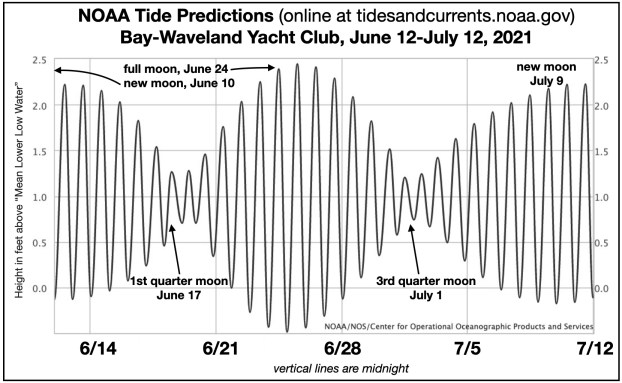 Predicting the ever changing tides

If you’ve done much inshore saltwater fishing, you know that timing your trip to take advantage of the changing tides can make the difference between angling success and merely time to meditate while breathing the salt air. Whether you’re planning to fish for flounder from a pier on the Mississippi beach or take a boat into the Louisiana marshes for speckled trout and redfish, you can check the predicted tides online at tidesandcurrents.noaa.gov.

This graph shows the predicted water level height due to astronomical tides on the west side of Bay St. Louis during the next month. The heights are referenced to the long-term average low tide at that location. Astronomical tides are changes in water level caused by variations in the gravitational pull of the moon, and to a lesser extent the sun. The strength of the gravitational force changes as the relative positions of the Earth, moon, and sun change over time, especially over the course of hours and days. The combined pull of the moon and sun is greatest when they are in line with the earth and each other twice every 29 days at the times of the “new” moon (which is when we can’t see the moon) and at the full moon.

Although the movement of moon, sun, and Earth can be precisely predicted, the movement of the resulting “hill” and “valley” on the ocean’s surface is complicated by the presence of the continents and the complex variations of coastlines and nearshore water depths. However, by the middle 1800s, the British mathematical physicist Lord Kelvin developed a method that uses multiple years of past tidal records at any coastal location to very accurately predict the astronomical tides there anytime in the future.

This graph shows only the variation in water level that will occur due to astronomical tides. However, the water level that is actually observed is a combination of the astronomical tide plus changes due to the wind and waves piling up (or blowing out) the water. Extreme examples on the Mississippi coast are when a strong north wind blows the water away from the coast in winter, or when a hurricane produces a storm surge.

I’ll leave it to the fishing expert of your choice to explain the best times to wet a line during the daily and monthly tidal cycle. Instead I’ll stick to a discussion of the tides themselves.

Next week, I’ll point out several things about the tidal cycles at Bay St. Louis and other locations along the northern Gulf Coast that look odd to people from most other coastlines in the world.

Mississippi heat can be trying for flowering plants

By Felder Rushing Spring flowers are usually easy, with azaleas and other early-blooming shrubs poking us in our color-starved eyes.... read more