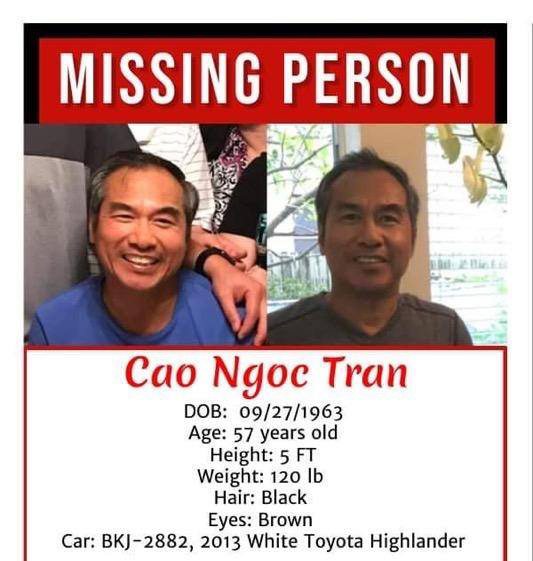 Picayune PD looking for missing person (Update, he was found in a hospital in Louisiana)

Update 11-10-20, Cao Ngoc Tran has been found in a hospital in the Lafayette, La., area. Rhonda Poche Johnson with the Picayune Police Department said she was notified that Tran was found in that hospital, and family have since been able to see and correctly identify him. She said that surveillance footage shows that Tran was apparently the victim of a car jacking in that area prior to being brought to the hospital. He is currently listed as being in critical but stable condition. The case has now being investigated by the Lafayette Police Department.

The original story is below.

A Picayune business owner has been reported as missing and Picayune Police Officers are looking for any information that could lead to his whereabouts.

Picayune Police Criminal Investigations Division Commander Rhonda Poche Johnson said the missing man is identified as 57-year-old Cao Ngoc Tran, who owns a business in Picayune but is a resident of Houston, Texas.

Tran was last seen on Nov. 6 leaving the Picayune area to go to Houston at about 8 p.m. He was driving a white 2013 Toyota Highlander with a Texas tag bearing BKJ-2882 and last seen wearing flip flops, a blue and black hat with dark blue pants and dark blue shirt. He is described as an Asian male, who stands five feet tall, weighing 120 pounds and having black hair and brown eyes.

Johnson said Tran is a dialysis patient who did not show up for his appointment set for last Saturday.

Wednesday and Thursday, gunfire could be heard from the field near the Pearl River County Sheriff’s Department, but it wasn’t... read more