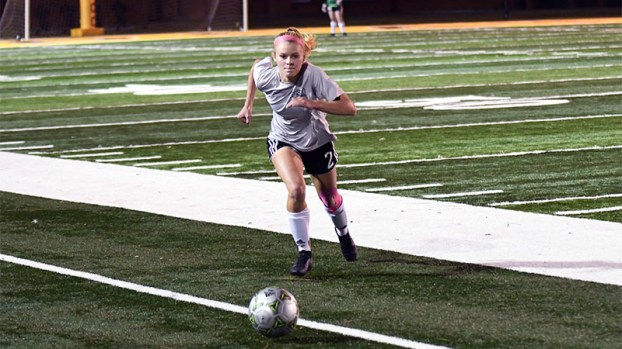 Deadly Offense: Poplarville has been able to use a strong group of attacking midfielders and forwards to rack up goals this season. Photo by Jonathan Mitchell.

Picayune and Poplarville face off on the soccer pitch

Picayune and Poplarville faced off in a physical matchup that showed both teams’ progress at this point in the season.

Nick Walerius and Jamie Wilson scored for the Maroon Tide while Bryson Andrews converted a penalty for Poplarville’s lone goal.

Picayune Head Coach Britton Fortenberry said his team is starting to settle into a new formation and that the players are getting a better understanding of where they need to be offensively and defensively.

“We’ve been well organized, especially on the defensive side of the ball. Tactically, when it comes to attacking and imposing our will, we’ve been growing. The young guys are getting there,” Fortenberry said.

Poplarville Head Coach Luke Gipson has been wanting to see more from his team when it comes to the technical side of the game like finishing, passing, etc.

Against Picayune those aspects of the game shone through with the players starting to get more comfortable with their own skills.

“Our touch has gotten a lot better. We’re starting to ping it around and find open space as we transition from defense to the midfield. All of that looks good and has gotten better. Something we’ll be focusing on in practice will still be the final pass into the final third. The last pass to connect somebody to get a shot on goal,” Gipson said.

Picayune will take on the Pass Christian Pirates at home Nov. 19 with the game starting at 7 p.m.

Poplarville will be on the road facing off against the Hancock Hawks the same evening with a start time of 7 p.m.

The Lady Hornets defeated Picayune thanks to goals from Chasity Dearman and Evelyn Kimball as Poplarville won another non-district match.

Picayune Head Coach Ed Williams said his team put in a shift defensively and held the Lady Hornets in check for long portions of the game.

“Defensively we played well. You could see the organization. It wasn’t like we were chasing or running after balls. We were in our spots,” Williams said.

Offensively the Lady Maroon Tide had opportunities to tie the game up, but couldn’t find the back of the net.

“We’re getting in good positions, but at times our touch lets us down. We’re not scanning the field well enough to pick the best option. A lot of times we pick the first option, not the best option. With good technique, if you have a good, clean first touch it’s easier to get your head up and see the field,” Williams said.

Williams purposefully scheduled tough teams like Poplarville for early in the season to prepare his team for the challenges ahead.

Soon the Lady Maroon Tide will be competing in district games, and the team is working to be ready for the change in stakes.

“I’m really pleased with where we’re at this season. District is coming and we’re going to be really well prepared when it comes,” Williams said.

The Lady Hornets and Lady Maroon Tide will have the same opponents as the boys teams, but the games will start at 5:30 p.m.

The head coach of the Poplarville girls team wasn’t available for comment prior to press time.