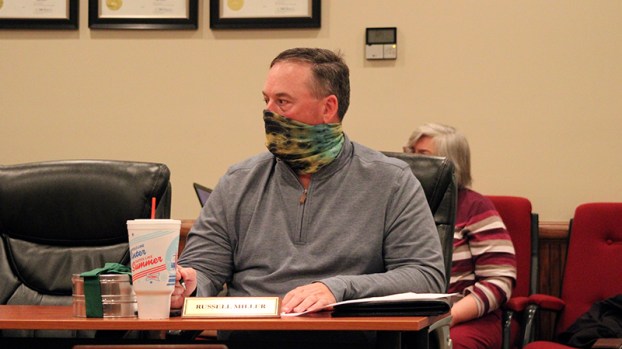 Alderman Russell Miller was recognized during Tuesday’s meeting for donating $300 for the instillation of a new sign in front of City Hall. Cathy Cook | Picayune Item

Poplarville’s Board of Aldermen decided to hold off on opening City Hall’s lobby until a clear plan is in place concerning COVID-19 precautions.

Poplarville’s City Hall has been open for drive-thru only business due to the pandemic. The Board discussed reopening City Hall’s lobby for public business.

Plexi glass shields have been added to the counters at City Hall in preparation to reopen the lobby, said Mayor Rossie Creel, who advocated for reopening to create a sense of normalcy. He suggested that visitors could be limited in number, guided to stay six feet apart, required to wear masks and have access to hand sanitizer.

Alderman Russell Miller also advocated for reopening the physical building, pointing out that businesses and schools in the community are open.

Board member Kevin Tillman said the lobby should not be reopened until the building has been professionally cleaned and the city has figured out who will be responsible for sanitizing it twice per day.

“It’s elderly people that come in City Hall and those people cannot catch this coming in there, and I know they love to do business in person at City Hall and my fear is for them,” said Alderwoman Anne Smith.

Board member Daniel Brown said the Board should wait to reopen the lobby until it has a plan in place for what to do if one of the City Hall employees contracts COVID-19.

“I just went through this recently,” said Brown. “My business was crippled. I do have that concern. If one person catches it, the other person has to quarantine, and City Hall has to close for two weeks.”

In a separate matter, the Board discussed engaging in an interlocal agreement with the county so the Pearl River County Election Commission can perform election duties for the city. The change would require dissolving the city of Poplarville’s Election Commission.

City Clerk Jane O’Neal said doing so could benefit the city by bringing in the county’s Election Commission expertise at a minimal cost.

Board members seemed interested in the idea, so city attorney Manya Bryan will write an opinion for the next Board meeting, laying out a step-by-step process for making the change.

—Heard an update from Police Chief Danny Collier that the department has submitted six consecutive months of NIBRS reports to the state and he believes they will soon be NIBRS compliant. The department is required to be compliant by a January deadline to be eligible for grant funding that has already been awarded.

—Acknowledged a donation of $300 from Alderman Russell Miller to offset the cost of the new City Hall sign.

—Approved the purchase of a 2015 Ford Explorer Police Interceptor for the police department from Copcarsonline for $10,995.

—Approved keeping the same water and garbage rates. Garbage rates were increased in August and water rates were last revised in 2018.

The next regular Board of Aldermen meeting will be Tuesday, Dec. 1, in Poplarville’s City Hall.