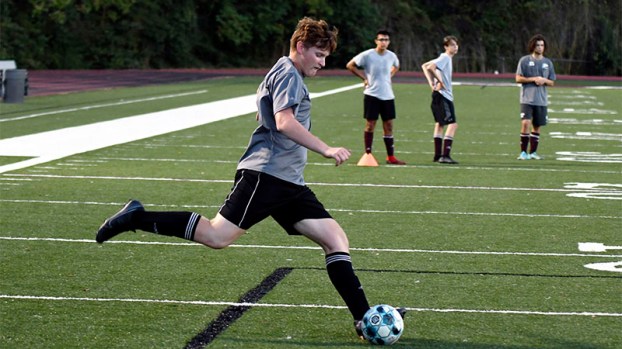 The Picayune Maroon Tide soccer team is going into the season with high expectations this year as the squad returns 10 athletes from last season’s starting 11.

The team didn’t get to have much of a summer program because of COVID-19, and even when school restarted the restrictions in place were quite stringent.

However, over time some of the protocols were relaxed and the team was able to train more like they’d been able to in pre-pandemic times.

The loss of the summer, and the competitive matches the team would’ve participated in during that period, means Head Coach Britton Fortenberry has a shortened window to evaluate his players.

While there are a lot of experienced athletes in the squad, there are also eight freshmen who are getting their first taste of varsity intensity this year.

“Losing those games hurts because now it feels like you’re making up ground and you don’t get the looks during the summer with some of the younger guys coming up that you would’ve gotten to see. Now you’re playing catch up,” Fortenberry said.

Having an experienced squad can help with player development as the older athletes show the youngsters the ropes.

Non-district games, along with tutoring from Fortenberry and the veterans, will be the best time for the new athletes to adjust before the intensity ramps up in district competition.

“(The experienced players) have done a really good job of not only handling their business and working hard, but also setting an example and bringing the younger guys along too,” Fortenberry said.

The Picayune School District’s COVID-19 protocol states that if a student sits within a certain space of another student who tests positive, the exposed student must quarantine as well.

This mean’s Fortenberry’s squad could be depleted for certain games as athletes are forced to stay home.

To prepare for that eventuality, the squad is making sure athletes are capable of playing multiple positions, and hoping a minimum number of players are affected.

“If you get a kid that goes down with COVID-19 and they’re on a two-week quarantine, that’s half your district schedule you could potentially be missing that player. So we’re just trying to get everybody up to speed, get everybody reps and making sure everybody is locked in,” Fortenberry said.

Fortenberry said because a lot of his players were participating in travel and club soccer before school started that the technical aspects of his players’ skills are in decent shape with players working on passing, dribbling and proper shooting form.

This means Fortneberry used training sessions up to this point to focus mainly on the tactical side of soccer.

Formations, patterns of play, how to attack and how to defend have all been points of emphasis during the offseason as the Maroon Tide prepares for its first game of the season.

“We’re still going to do a lot of the same things we did in the past that were successful, but we’re going to add some new formations and tactics. With this experienced group, they can handle that higher level of soccer now,” Fortenberry said.

The first game of the season will be a “classic” against Bay High, at home, on Oct. 29 that’ll start at 7 p.m.

The Poplarville Athletic Association’s fall football season is nearly over with athletes and parents alike enjoying the chance to see... read more