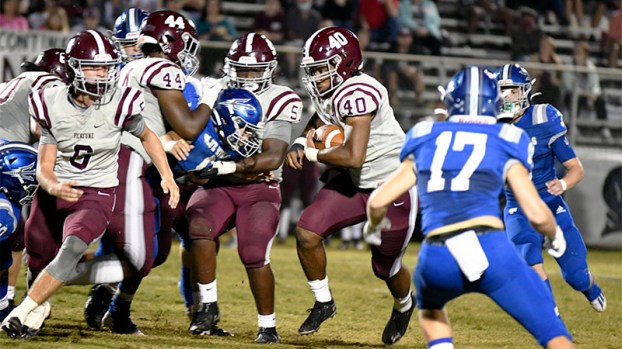 Up The Middle: Picayune running back Dante Dowdell heads into the teeth of the PRC defense as Blue Devil defensive back DJ Duke looks to make the tackle. Photo by Jonathan Mitchell.

A blistering first half from the Picayune Maroon Tide was too much for the Pearl River Central Blue Devils to overcome when the two teams met on the gridiron last night with Picayune winning 48-7.

Things went right for Picayune from the get go as outside linebacker Josh Tatum picked up a backwards pass that fell behind the line of scrimmage and ruled a live ball, before taking it 24-yards to the house for the Maroon Tide.

Morgan Craft landed the extra point, giving Picayune a 7-0 lead with 11:01 left in the first quarter.

PRC got the ball back, but a Blue Devil fumble was recovered by linebacker Nick Doane for Picayune to give the Maroon Tide offense possession of the ball on PRC’s 32-yard line.

Running back Austin Samples took a handoff on the very next play and sprinted into the end zone for another Picayune touchdown.

Craft’s extra point was good, and Picayune had an early 14-0 lead.

PRC struggled to get into a rhythm offensively and Tyler Diebold had to come on the field and punt the ball away on the Blue Devils’ next possession..

Picayune got the ball on its own 9-yard line after Diebold’s punt pinned the Maroon Tide deep in its own territory.

However, some big plays from the Picayune backfield of Samples, Dorian Robinson and Dante Dowdell quickly got the ball inside the Blue Devil 20.

Robinson then capped off the 91-yard drive with a 9-yard scamper into the end zone.

Another PAT from Craft was successful and the advantage was now 21-0 in favor of Picayune.

On PRC’s following possession the Maroon Tide defense held firm, but the Blue Devils tried some trickery with a fake punt on fourth down.

Picayune was ready for the fake, and stopped the attempt short of the line to gain, turning the ball over on downs.

The extra point by Craft was no good, but Picayune took a 27-0 lead into the second quarter.

Both teams traded possessions until Picayune full back Payton Waddell found pay dirt on a 3-yard run with 8:53 left in the second quarter.

PRC’s offense was driving the following possession and was on the Picayune 34-yard line when quarterback Cam Brunson’s pass attempt was intercepted by Robinson for the Maroon Tide.

Picayune then marched down the field and scored in under two minutes when Hickman found his way into the end zone on a 3-yard run.

Craft made up for the previous miss by splitting the uprights and Picayune took a 41-0 lead into halftime.

Picayune started the second half with the ball and was able to cap off a 51-yard drive with a touchdown as full back Darnell Smith took the ball in from 22-yards out.

Another PAT from Craft saw the Maroon Tide take a commanding 48-0 lead.

The two teams then traded possessions as both defenses buckled down.

In the final seconds of the game, after a drive that started on their own 10-yard line, the Blue Devils prevented a shutout game.

Brunson rolled out to his right and found wide receiver Tyce Yarborough wide open for a 5-yard touchdown pass.

Diebold came on for the PAT, and split the uprights to end the game 48-7.

After the win, Picayune Head Coach Cody Stogner said he was proud of his team’s ability to dictate the game.

PRC’s Head Coach Jacob Owen said even though the two teams are county rivals and the games between the programs can be heated, there’s always a mutual respect when the smoke clears and final whistle is blown.

“They’re a program that anyone who is trying to build a (program) would love to emulate. I know they’re our rivals and we don’t like each other, but they do a lot of things right and I have a lot of respect for them,” Owen said.

Picayune will travel to Pascagoula Oct. 30 for its next game while PRC will be on the road at East Central the same day.

Both games are scheduled to kickoff at 7 p.m.