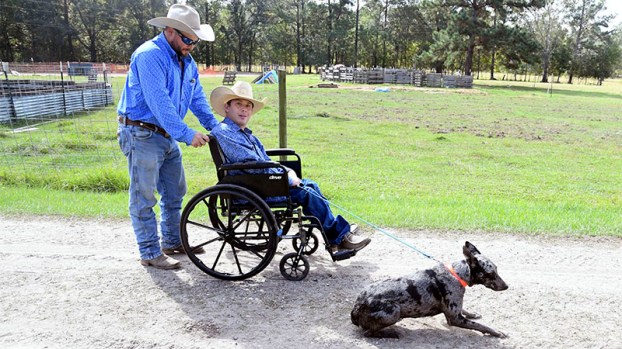 Ready To Train: Jared Lee pushes his younger brother Cody Lee in his wheelchair as the pair takes Cody’s competition partner Batman to do some cow dog training. Photo by Jonathan Mitchell.

Duo overcomes the odds to win a championship

Cody Lee and his 3-year-old dog Batman had never taken part in a Cow Dog Trial competition before, but that didn’t stop the pair from taking first place and winning the Novice Champion Buckle Oct. 18.

Cody Lee is wheelchair bound due to cerebral palsy, so his older brother Jared Lee served as wheelchair pilot and partner in the competition when the two traveled to the first edition of the American Ranch Dog Trial held at NRS Ranch in Decatur, Texas last Sunday.

Jared Lee has been training dogs for the past eight years, with Batman serving as his own partner in competition twice before the event last weekend.

Batman and Cody on the other hand had never competed together as a pair, and hadn’t even planned on participating to begin with.

Cody had watched his older brother put on shows exhibiting the discipline and skill of his canines in the past, but only recently got the itch to compete.

The competitive event is a complicated one, made up of numerous steps.

First, the handlers loose the dog to go and find a group of five cattle hidden a quarter of a mile away beyond a tree line.

The dog would then be responsible for bringing the herd back to the handlers, at which point the cattle would be ushered through a funnel of cow pens.

Once all the livestock passed through, the dog has to shepherd the cows until the herd is in front of a gate.

The handlers then open the gate, get the herd through and shut the gate before allowing the dog to finally guide each cow into a pen.

Once the gates on all the pens are shut, time is called.

Even though Cody and Batman had never been in that situation before, the chemistry between the two was enough to get them through the trial and finish in just over eight minutes, best in the class.

The result earned Cody a personalized belt buckle and champion jacket, but also served as an inspiration to continue competing.

Now there are no limits.

“Every competition we can get into, near or far, we’re going to go to because that’s what he wants to do. We’ve faced all kinds of obstacles in our lives, but anything is possible through God and faith. That’s our deal, we want to make sure people understand, don’t ever give up,” Jared Lee said.

The experience of competition also inspired others, with a gofundme page being set up in order to get Cody an Action Trackchair.

The mobility device is like a normal wheelchair, except it’s set on motorized tracks similar to those of a tank.

It has off road capabilities, and can even allow users to stand up by shifting into a standing position while the user is strapped in.

The vehicles cost about $12,000, but with the help of several sponsors and people’s generosity, Cody is well on his way to getting one. Jared Lee said the new chair would be life changing for his little brother, not only with every day routines, but also when it comes to competing and working.

“I never dreamed this would be a possibility, but I always said if I could just trade places with my brother, if I could ever let lightning hit me and swap places (I would). I had my first half, let him have the second half and it’s fixing to be a reality for him. Cody Lee will no longer be bound to that wheelchair,” Jared Lee said.

No one knows what the future holds, but for Cody, Jared and Batman the possibilities are endless.

To contribute to the cause of purchasing Cody an Action Trackchair, go to the Cowboy Cody gofundme page, located at gofundme.com/f/cowboy-cody.

PAA getting ready for fall baseball and soccer programs

The Poplarville Athletic Association is in the midst of its football season, but is already laying plans and completing registration... read more