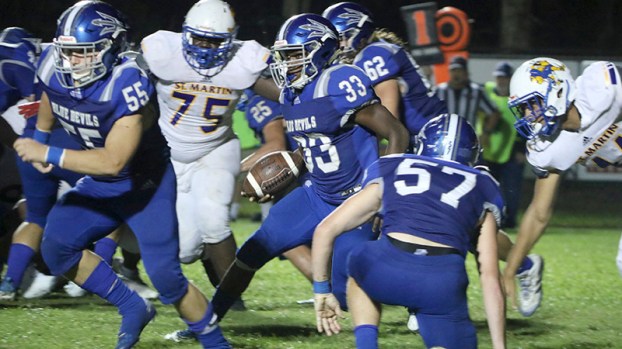 Pearl River Central’s Blue Devils pulled off a close win Friday night against the St. Martin Yellow Jackets 19-17.
It was a win that PRC’s Head Coach Jacob Owen chalked up to one thing.
“Guts, guts, guts, guts and guts,” Owen said. “Yes sir, good ole fashioned high school football game right there.”
The win put the team 2-0 on the season, but it didn’t come easy. St. Martin started the game in the lead early on. Deep in the first quarter, St. Martin got close to the end zone through eight plays covering only about 25 yards due to a strong Blue Devil defense. That strong defense forced the Yellow Jackets to have to punt from the 24, but Gabriel Showalter’s kick fell between the uprights, giving the Yellow Jackets the lead with 3:20 left to play in the first.
The Blue Devils answered back with 8:45 left to play in the second quarter after Destin Coleman capitalized on a six yard run to reach pay dirt. Tyler Diebold’s punt after point attempt fell wide, but the Blue Devils still held the lead at 6-3.
St. Martin didn’t let that lead last long. On the ensuing play, St. Martin’s Makia Hebert ran the ball from the Yellow Jacket 46 all the way to the end zone. With Showalter’s PAT, the visiting team held the lead for the last time on the night at 10-6 with 8:31 remaining in the first half.
On the Blue Devils’ next possession, the team was forced to punt on fourth down. During that punt it appeared as though PRC pulled in a touchback, but the scoring play was called back by the officials.
After getting the ball back on downs, PRC capitalized on the first play of that possession from the team’s own 15 for an 85 yard scoring play by Coleman. Diebold’s PAT attempt slipped due to wet conditions, forcing the team to try for a two point conversion. But the pass was no good. The Blue Devils still held the lead at 12-10 with 2:36 remaining on the clock until halftime.
Deep in the third quarter, the Blue Devils widened the lead when Coleman toted the ball from St. Martin’s 15 with 1:58 left in the quarter; combined with Diebold’s PAT the score was
19-10.
St. Martin’s final score came on the very next play when Noreel White returned the kickoff for more than 80 yards and Showalter’s PAT crossed the uprights. With 1:58 left to play, the score was 19-17.
The Yellow Jackets got within striking range once more during the night, but PRC’s defense successfully blocked Showalter’s kick.
Owen said the only downside to the team’s performance Friday night was also a positive for the Blue Devils.
“Well you know, we’d like I’d like not to punt as much. We’re doing a pretty good job on punt team, but I’d like not to use them so much,” Owen said.
PRC will host Forrest County Agricultural next week. Kickoff is at 7 p.m.