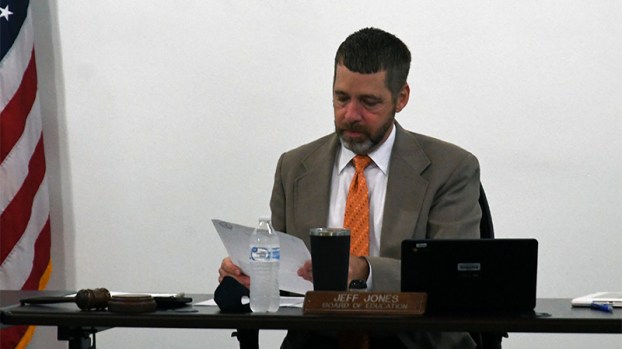 In Person Meeting: Unlike the virtual board meeting Thursday evening, most PRC School Board Meetings are held in person and are open to the public at the Endeavor School Chapel. File photo by Jonathan Mitchell.

The first item on the agenda was for the Board to approve giving administrative leave to all district employees for the date of Sept. 15.

The Board approved the motion unanimously.

This decision was made because the schools were closed last Tuesday due to forecast of severe weather from Hurricane Sally.

The Board also discussed two changes to the district’s reopening plan.

The first change is that students who originally chose the virtual option would be able to apply to return to the traditional classroom for the second nine weeks.

Originally the district policy said if a student chose the virtual option they’d need to continue using that option until the end of the first semester.

However, Superintendent Alan Lumpkin said there have been several parents and students who have asked to return to the physical classroom after spending the first nine weeks learning from home.

District II Board Member Jerry Frazier asked Lumpkin why so many students of the district have asked to return.

While Lumpkin couldn’t give a definitive answer, he said that when the schools opened in August the COVID-19 case numbers in Mississippi were quite high, which could’ve led to some parents and students choosing the online format.

Lumpkin said now that numbers have stabilized and community members have been able to see the COVID-19 protocols in place for in-person education, they may now feel safe enough to send students to the physical classroom.

“We were up front when talking about virtual learning. We feel very confident in that platform, but with that being said, it will not replace the student being able to sit in the classroom. That’s the best place to be. If there’s not a medical situation, then I think we should allow students to return,” Lumpkin said.

Lumpkin said once the changes were approved an email would be sent out to parents within the district detailing the application process for their child to come back to the traditional setting.

The second change made to the reopening plan was that if a student using virtual learning was failing one or more classes at the end of the first nine weeks they would be required to return to the traditional setting for the second nine weeks, unless there is a physician’s order stating the student must remain in the virtual learning setting.

District I Board Member Christian Burge asked Lumpkin if the district was legally within its rights to require students return to class, and Lumpkin said the district did have that power and other districts across the state were implementing similar changes.

Following the discussion the board unanimously approved the changes to the reopening plan before adjourning.

The next regularly scheduled meeting will be Oct. 8 at 5:30 p.m.