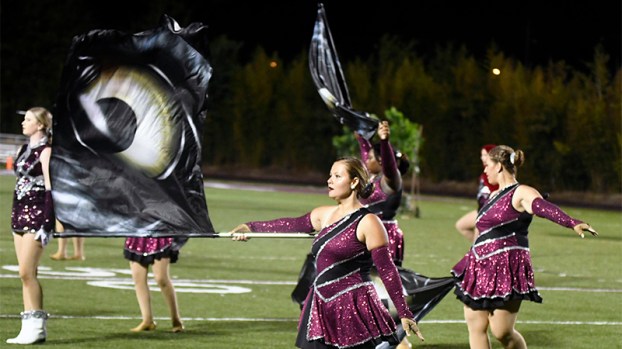 Finally On The Field: Senior Brooke Vasquez and other members of the Picayune color guard go through this year’s flag routine during a recent halftime performance. Photo by Jonathan Mitchell.

The Picayune color guard has had to deal with a variety of changes due to COVID-19 restrictions, but those obstacles can be overcome as the group prepares for its third performance of the year. Director Jessica Malley said the group’s first performance two weeks ago wasn’t as sharp as it could’ve been, with nerves playing a part in that.

However, after another week of practice and hard work Malley saw the improvement she expected.

“They did so much better this past Friday night. You could tell they’d been working hard on the field during practice and it’s definitely starting to show. This week we’ve been cleaning it up to make sure the routine looks even better,” Malley said.

One of the new COVID-19 protocols in place requires the color guard sit in a sequestered set of bleachers near the end zone alongside the band and Pride of the Tide dancers during home football games.

The arrangement allows for social distancing, and keeps interaction with people outside of the group to a minimum, but it also means the color guard can longer interact with fans quite as easily.

“Normally we bounce back energy between the cheerleaders and student section, and that’s part of what makes Friday nights magical is having all that energy and excitement to really get the football team going,” Malley said.

However, Malley said having a place to perform is worth the inconvenience after the group wondered if a season would even occur because of the pandemic.

Now with two performances behind them, Malley is hoping her athletes use those experiences to clean up the routines.

It’s been a strange couple of months for the color guard as they adapt to the COVID-19 protocols that came along with school restarting.

The athletes at this point know how the pandemic can affect the things they love and so they’re making the most of every day they have out on the field practicing and performing.

“They’re working tails off at practice. The girls really are giving us their all in practice and that’s all we can ask for,” Malley said.

The Picayune Maroon Tide band has only been able to perform twice this year, but Band Director John Cockrell said... read more