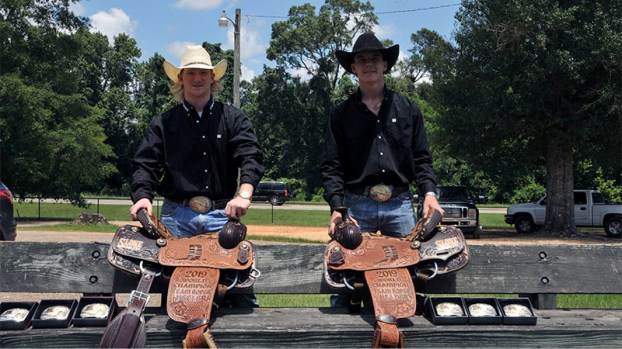 Part Of The Team: Team Ropers Bryce Graves and Kason Davis pose with their prizes after being named the 2019 National Champions in team roping. The ropers are two of the 27 athletes that will be part of the PRCC rodeo program this year. File photo by Jonathan Mitchell.

Frank Graves and his rodeo athletes are preparing for an unusual fall of practices and competitions for the Pearl River Community College rodeo program.

College rodeo’s governing body is the National Intercollegiate Rodeo Association, so the rodeo program wasn’t moved to the spring like other sports when the National Junior College Athletic Association made that decision.

Instead, the athletes have continued preparing for a fall season that, at the moment, is still set to take place.

Graves said he’s not expecting a lot of rust from his athletes because a lot of them have the facilities to practice at home. Even after school was shut down and national competitions were cancelled, the athletes were still able to work on their skills.

“A lot of kids practice on their own, and have probably been practicing the whole time and going to amateur events,” Graves said.

The team’s first rodeo will be in Marshall, Missouri Sept. 17, which means the athletes have a little over a month to prepare for their first competition of the year.

Graves said athletes participating in amateur events help them stay in the competitive mindset, and can also help with nerves when the athletes start competing in bigger rodeos.

“I think it’s really good for them to keep competing and it gets you to that that point where it doesn’t shock you when you get there. There are a lot of amateur rodeos. Most of the kids do that and it helps them keep that edge,” Graves said.

Graves said the plan is for him and his 27 athletes to practice as often as possible, but that may be difficult given the reduced availability of places to do so. An arena is currently being built for the PRCC rodeo program, along with a barn and other necessities, but Graves said it’s unlikely construction will be done until next semester.

That means the athletes will have to use the county fairgrounds in Poplarville, which may not always be available.

However, the program will adapt, with athletes sometimes going to each other’s houses to use their facilities as they prepare for an unprecedented fall season. “When we get our own facility it will be a lot easier to practice every evening. We might be going to different peoples’ places with several of the kids and practicing there. Once we get our own facility it’ll be different and we’ll have scheduled practices,” Graves said.

The Poplarville Athletic Association will be having registration the next two weekends for fall football and cheerleading as the organization... read more