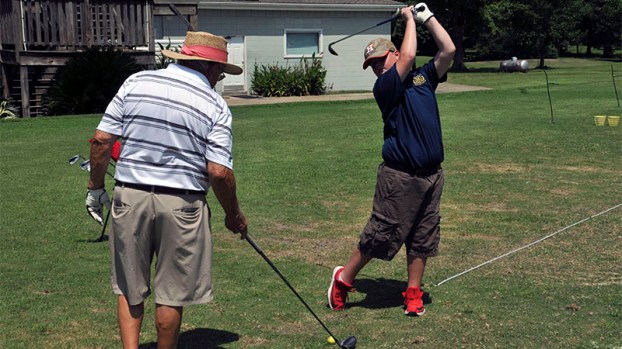 Back On The Course: Players have been able to come back to Millbrook and play in tournaments after several months off. Photo by Jonathan Mitchell.

The Millbrook Golf & Country Club plans to host several tournaments over the upcoming weeks that club members and non-members can take part in.

On July 17 the Kiwanis Club will be hosting a fundraiser tournament, followed on the 18th and 19th by a Millbrook Club tournament that’ll include 36 teams and 108 players.

Following the club tournament will be a fundraiser tournament hosted by the Picayune baseball team on August 1.

Each tournament will entail a plethora of health guidelines so players can compete safely.

Only one person per kart is allowed unless two players say they’ve arrived at the tournament together and feel comfortable sharing a kart.

The karts will be wiped down with bleach, and while players are allowed to come into the clubhouse to eat, the tables are spread out to observe social distancing rules.

However, General Manager Colby Scarborough said there are also tables outside, a pavilion and a pool area players can eat in if they’d rather have more space.

The food is served on disposable plates so their dish and cutlery will not require washing by the staff.

Scarborough said a benefit of hosting tournaments once again is that it brings non-members to the course where they can spend time using the facilities.

“I’m very happy with that. I would say 10-15 (new members) have been due to outside guests coming into the facility, seeing it and enjoying themselves,” Scarborough said.

Another added bonus for Scarborough hosting these tournaments is that he’s helping people forget about what’s going on around the world.

The course can serve as a place of peace and respite for members, where they can spend hours just focused on golf and enjoying the company of their friends and family.

“I’ve seen a lot of people happy to be out, enjoying the fresh air and having some sense of normalcy. It’s a refreshing environment for them to come into,” Scarborough said.

Scarborough golfed for 20 years before coming back to Millbrook and taking over as the general manager of the club he once played at when he was younger.

Over the past year and a half Millbrook has made improvements to its clubhouse, pro shop and food options, which Scarborough said is a rewarding thing to do for the community he was born and raised in.

Now when patrons visit the facilities they can enjoy top of the line products while playing close to home.

“I tell you it puts a very big smile on my face. It’s very rewarding and exciting to see there is some good out there. People are able to come to a place that’s home to them and be comfortable,” Scarborough said.