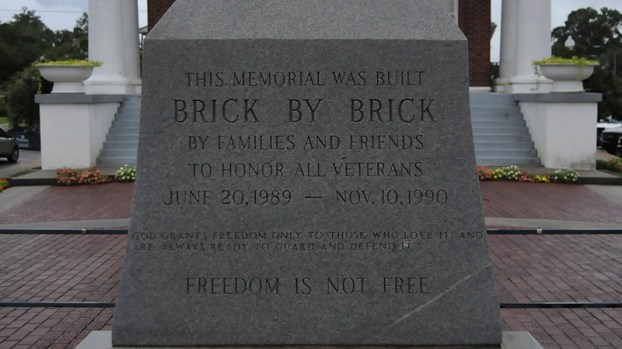 Photo by Laurel Thrailkill; The 27-foot-tall monument in front of City Hall serves as a symbol of appreciation for local veterans and their families.

Anyone who has been to Picayune’s City Hall has seen the towering obelisk monument surrounded by engraved bricks in front of the historic side of the building, but there is more to this monument’s history than meets the eye.

According to information in a book entitled “Pearl River County Veterans,” authored by N. Christian Smoot and Charles E. Jones, the Career Women’s Club is responsible for the existence of the 27-foot-tall veterans monument.

Even though the Career Women’s Club is no longer in existence, the club is the reason the monument was built in the first place. Jane B. Smoot, one of the founders of the club, wanted to construct a veteran’s memorial since the club’s founding in 1987, according to Pearl River County Veterans.

“It really bothered her because there was no memorial to the local veterans as there had been in her hometown of Hiawassee, Georgia,” Pearl River County Veterans states.

Smoot got in contact with Fleming, who was president of Greater Picayune Area Inc. at the time.

The club was offered $15,000 in matching funds from the Greater Picayune Area Inc. to go toward the construction of the monument, but they needed to raise $15,000 on their own by Dec. 31 1989 to fully fund the monument’s construction.

The Brick By Brick Committee was created with the objective of raising money for the monument.

The committee sought to raise funds for the monument by selling engraved bricks to veterans’ families at $50 each.

“The committee was made up of doers,” Pearl River County Veterans states. “Everything about this project was carefully and thoroughly planned.”

The project was finally funded, and the first bricks that had been purchased to honor veterans were installed at the base of the monument during a formal ceremony in 1990. The rest is history.

To this day, bricks are still available for purchase for installation at the base of the monument. Fleming encourages any members of the community wanting to honor a veteran to purchase one of the bricks.

“There’s a real need for Brick By Brick,” said Fleming. “I know that the people of Picayune will respond well.”

To order a brick or for more information, members of the community can contact City Hall at (601)-798-9770. The price is $50 per brick, and applications can be picked up and returned to City Hall.

Tax-free holiday will be held next weekend

The state of Mississippi will hold the annual tax-free holiday from midnight on July 31 until midnight on Aug. 1.... read more