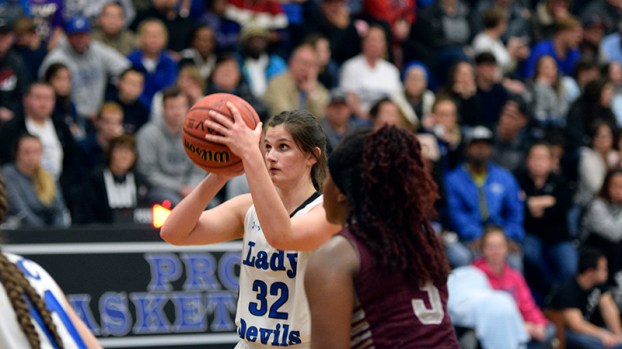 The Lady Blue Devils basketball team will have a new coach at the helm this year. FIle photo

Cliff Bauer decided it was time to come back to the district where his coaching career began as he made the decision to become the new girls basketball coach at Pearl River Central High School.
Bauer had spent the last year as an assistant basketball coach at East Central, but prior to that he was the girls basketball coach at Pearl River Central Middle School.
Bauer already knew the athletes on the varsity squad prior to taking the job because of his history at the middle school, so getting to coach those athletes again was a dream come true for the new coach.
“I genuinely love these kids and there’s not another job in the world I’d prefer. It’s enticing because I’ve known these kids since they were knee high. They’re the reason I got into coaching,” Bauer said.
It’s a strange time to take over a new program while in the midst of a pandemic, but the unprecedented times have led to Bauer and coaches across the nation adapting and overcoming the unique obstacles presented to them.
Instead of looking at the guidelines and restrictions in place as a challenge, the new coach has taken a more optimistic approach.
“I embrace it. We do what we can as far as practices go, but we are able to get after it; it just looks a little bit different. That’s life. You’re going to have things that come across that are difficult or challenging,” Bauer said.
The Mississippi High School Activities Association has a litany of guidelines programs have to follow while practicing this summer, including the prohibition of playing other teams.
While this may be a detriment for some programs, Bauer sees it as a positive.
Instead of having the athletes thrust into game like situations while unfamiliar with Bauer’s system and style of coaching, the team can use the summer to nail down all the details.
“I get to use the summer to drill it into their heads. It could be a challenge for basketball coaches, but as a new coach with a new system I think it’s been beneficial because they can learn,” Bauer said.
The MHSAA’s restrictions are subject to change and have been loosening up as time goes on, but it’s still unclear what the future will look like.
Last season didn’t start until November, and there’s no telling what the world will look like five weeks from now, much less five months.
At the end of the day, Bauer is just hoping he gets to have a season with his new team, and that it starts sooner rather than later. “As long as we get to play I don’t care what it looks like,” Bauer said.

Adam Feeley will be taking over the position of athletic director for the Picayune School District after the former AD,... read more