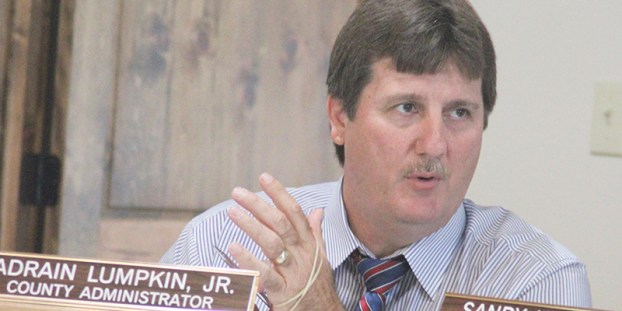 Work Restrictions: Adrain Lumpkin, county administrator, advises the Board of Supervisors that MDOC will decide when state inmates will be allowed to work outside of county jails again. Laurel Thrailkill | Picayune Item

Supervisors want trusties to get back to work

Several members of the Pearl River County Supervisors are pushing for trusties held at the county jail to be allowed to go back to work again. Trusties have been kept inside the facility since mid-March to reduce the risk of COVID-19 spreading in the jail.

At their regular meeting Wednesday, Board members discussed when the county would be allowed to use inmates in the county jail for county work again. The county relies on inmates for a variety of work, including cleaning the County Courthouse.

District V Supervisor Sandy Kane Smith said the county houses Mississippi Department of Corrections inmates with the understanding that the trusties will do work for the county and as such is not reimbursed for housing the state inmates.

“We’re responsible for them anyway, so why can’t we make the decision on whether they go out to work?” said District II Supervisor Malcolm Perry.

District III Supervisor Hudson Holliday suggested the county call MDOC and request an exception to allow the inmates to resume their work responsibilities outside of the jail.

In mid-March, representatives with MDOC directed the Sheriff’s Department not to allow state inmates to work outside of the facility to reduce the risk of spreading COVID-19 within the jail, according to previous coverage.

County Administrator Adrain Lumpkin said that MDOC has the final decision on when the trusties will be able to leave the jail for work again.

The Board discussed contacting MDOC to see if the inmates could be allowed in public to work again. Smith said officials from other counties have also asked when inmates will be allowed out of jails to work again during conference calls with the Governor.

The Board entered executive session to discuss tax sale litigation and personnel matters.

The next Board meeting will be Monday, June 1 at 9 a.m. in the Pearl River County Board room.

Tuesday evening a family disagreement heated up when one man lit fire to a home on the family property. Maj.... read more